Anyone Can Play Guitar - Month 2

The benefit of blogging my progress with the Geetar has already borne fruit. After last month's dismal effort I have at least managed a weekly twanging session. That's not to say I've made any huge strides but I have played Guitar at least 3 times more than I did in the whole of last year.

To keep in step with the rest of the blog here's a list of five things I have discovered so far.

1. It remains as hard as I remembered to achieve anything sounding even remotely like a tune.

2. I am gradually getting to grips with "Bad Moon Rising" and reckon this could be my breakthrough song. My first attempts had me feeling comfortable with the D and A chord but struggling to find the G. I found a video that helped me get my head around the strumming pattern and, whilst thinks have only moved from "incredibly awkward" to "really very clunky", I feel I am getting somewhere. 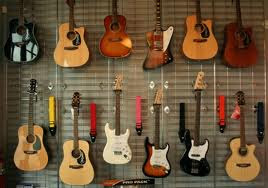 3. "Folsom Prison Blues" may be a bit more of a challenge. Ostensibly this is a three chord song too (E,A7,B7) but I've not got my head around combining them yet. My confidence was knocked further by a video tutorial that explained how to do the twiddly intro. The chap on the video made it sound fairly simple but this failed to transfer to my fingers. On a positive note an hour failing miserably to play this was rewarded by ten minutes in which I almost nailed the first couple of lines of "Bad Moon Rising". Almost.

4. Ukulele's might only have four strings but, it turns out, that doesn't make them any easier to play. By which I mean that I couldn't pick it up and get a tune out of it within an hour. I thought I'd have a go playing "Bad Moon Rising" on my eldest's Uke. The chords use different finger placements and I found them harder to form then on Guitar, let alone attempt to change from one to another. Think I'll stick with the six string for the time being.

5. I need to practice, practice, practice. I can probably make some progress with a weekly strum but a mate who can play guitar suggested than 10 minutes a day would be better than 2 hours a week. I suspect he's right too. Right now my fingers are weak and useless, I need to toughen them up and the only way to do this, and get those chord shapes into my head, is to keep on playing.

I've been playing a long time. 10 minutes a day (or better yet at least 30 min/dy) is better than once a week. I don't know what your practice plan is but I try do 10 minutes of warm up - hand / finger exercises, 10 minutes of scales and 10 minutes of chords. Then I just play songs for a bit.

Scales? Warm-up exercises? Yikes! Thanks for the good advice Chris.

I'm beginning to realise that daily practice would help but I'm struggling to find time to strum even once a week at the moment.

Think I may eventually have to give up on the self taught method and get someone to start me off properly. Will keep on trying though.