I should start by stating that my technical music knowledge is pretty poor. Despite my frequent attempts to learn guitar I've still not progressed beyond three chords strummed very slowly, and have so absolutely no idea about the relative merits of the amps below with regards to sonic quality.

This top five is based mainly on how they look and which bands use them rather than their contribution to the development of electrically amplified contemporary music. Where I have stated specific models this is almost entirely due to the name sounding cool, though in a few instances I did do a bit of research*. (* read Wikipedia)


1. Orange Thunderverb 200 - Hands down the prettiest amp in this list. The Orange Music Electronic Company was founded in 1968 (the same year I was born fact fans) though I only really noticed them on stage fairly recently (late 90s onwards maybe). The cacophanous Jim Jones Revue are one of many recent bands I've seen with Orange amps on stage. As good an endorsement as I can think off. The use of the colour orange is a fine piece of marketing and enables the use of a single Orange amp as a kind of feature wall equivalent in a bank off regular black/grey units. 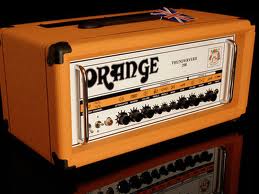 2. Marshall JCM900 series - Surely there are none more metal than the classic Marshall amp. As an 80s metalhead this was defintely the king of the pile. No self-respecting rock band would want to be seen on stage without a massive wall of Marshalls behind them. The Grateful Dead were famous for playing in front of a vast wall of Marshall's and I once saw Status Quo attempt the same feat (though suspect very few of them were actually turned on). 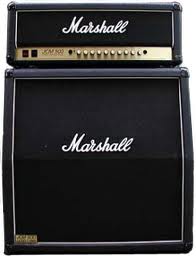 3. Hughes & Kettner - A recent discovery, of which I know very little. Made in Germany since the mid-80s, I've not yet seen one live on stage. The selling point for me is that cool glass frontage at the top that allows you to see the valves. 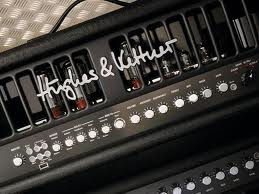 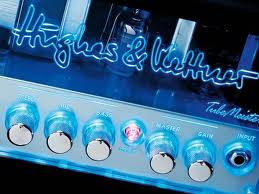 4. Vox AC30 - There's something dusty and old school about Vox amps that befits a unit that rose to prominence thanks largely to the British Invasion of the early 60s. The Beatles, The Stones, The Kinks & The Yardbirds were all Vox users. Modern Vox amps have retained that classic styling, but it's that original fawn coloured AC30 that wins out for me. 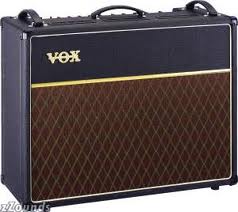 5. Mesa Boogie Dual Rectifier - Pretty much included because I've always liked the name, it's another amp with Heavy Metal associations. Metallica have been using them since 1986 (the first tour I saw them live), Kurt Cobain used them during the "Nevermind" & "In Utero" tours and Pink Floyd Guitarist, Dave Gilmour, had a Mesa/Boogie head, which he used as a pre-amp for overdrives set up in a send/return chain to the pedal board*, during the wall tour. (*You'll be right if you're thinking that sounds unsually technical, I copied it from the incredibly detail Gilmour repository that is Gilmourish.com) 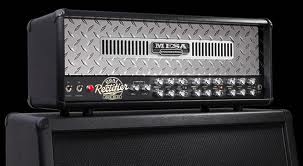 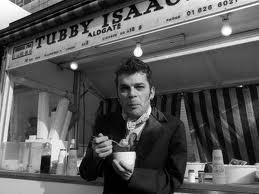 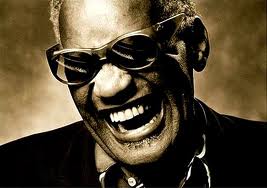 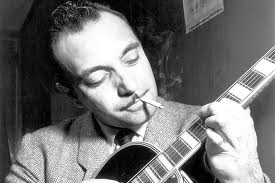 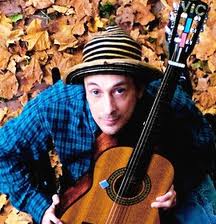 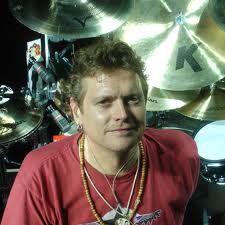 The Leppard were from Sheffield but had a very American friendly sound that paid dividends for their global album sales. The first album they released after Rick's return sold twice as many as the previous one. I saw them live twice, both after the accident, and they were as good as any of the "hair metal" bands I was into at the time. Rick probably makes this top five less for the music he helped create and more for the inspiration he has provided in overcoming a seemingly insurmountable barrier to doing what he loved.
.
Posted by Chopper at Friday, September 14, 2012 No comments:

I stumbled across Tony via the magic of Twitter. I can't remember now how, no-one else I know was following him so I think I was just randomly searching for something and noticed his twitter handle @TonyTheGigGuy. He had just written a post about seeing the Wurzles live and clearly shared my love of live music. Couldn't hurt then to ask if he fancied doing a top five. Not only did Tony oblige but he turned in a real corker. This is the sort of top five I'd love to be able to write. If you enjoy the top five you should definitely check out his blog at TonyTheGigGuy.com, he's just written a cracking post about growing up in London in th 70s and Public Image Limited.

Death Discs were huge in the early 60s. Aimed squarely at teenage girls, they generally dealt with the same theme. Boy meets girl. Boy falls in love with girl. Girl is horrid to boy. Boy takes stupid risk, usually based in car or on motorcycle. Boy dies in girl's arms. The finest example of this type of death disc leads the way in the countdown below, but there were plenty of variations on the theme later in pop music history.

5. “Leader Of the Pack” – The Shangri-Las
The most famous death disc of them all. From the spoken “Is she really going out with him?” over the mournful piano to the yearning outro “... now he’s gone” this tale of a lost love is pop perfection. Girls, motorcycles, death – it has the lot.

4. “Stan” – Eminem
Passing over the unfortunate consequences this record had in propelling the anodyne Dido (the ‘l’ is silent) into superstardom, just cast your mind back to when you first heard this record. It was widely anticipated as “that Eminem’s new single”, we were all used to the jokey brattish delivery and cusswords. So this slow, emotional tale of a super-fan who took it too far – told, in a genius twist, from the obsessee’s POV – absolutely stunned everybody. I may not remember where I was when I heard John Lennon was shot, but I do remember where I was when I heard “Stan” for the first time *.

3. "Emma" – Hot Chocolate
They’re mostly known for the classic party anthem “You Sexy Thing” which does SO contain contain the line “I believe in knockers”, and I’ll punch the man who says otherwise. But in the early days, Hot Chocolate specialised in sleazy, funky, psychedelic pop songs about Serious Stuff like race relations (“Brother Louie”) and .. well, teenage suicide (“Emma”). If you don’t at least fill up at the suicide note line “Darling I love you – but I just can’t go on living on broken dreams no more” then sir, or madam, you have no soul. None.

2. “Mary C Brown And The Hollywood Sign” – Dory Previn
Dory Previn died earlier this year. She was a constant presence in the back of my head since I discovered her records in West Norwood record library. This song is quintessential Previn – a jaunty little West Coast sounding tune with a sad, disturbing story with a horribly black comical punchline (“the second or third letter ‘O’ “, indeed!).

1. “Excerpt From A Teenage Opera” by Keith West
An insane piece of bubblegum from 1967 with its insanely jolly chorus which distracts your attention from the fact that its actually about a food delivery man who dies of a heart attack through overwork. Probably a fable for our times or something.

* I was driving along a road in Surrey. It isn’t interesting, but it IS true.
Posted by Chopper at Friday, September 07, 2012 No comments: