There has been one topic occupying my thoughts this week - getting tickets to see the classic seventies Status Quo line-up of Rossi, Parfitt, Lancaster & Coghlan play live together for the first time since 1984. A false start on Tuesday, that largely involved me watching my PC do nothing for 20 minutes before telling me the tickets had all sold out, was followed by a minor panic on Wednesday as I was unable to logon at the allotted hour. However, a network of friends were in position to save the day and we're all off to see the band at Hammersmith next March.

Status Quo were my first favourite band. I discovered them in the early eighties but soon worked my way backwards towards the albums of their peak. I didn't see them live until 1986 so, despite attending over 30 Quo gigs, I have never seen the band with Alan Lancaster or John Coghlan. Hand on heart this is the most excited I've ever been about a band reuniting.

This is one of the few live albums that manages to capture the feeling of really being at a gig. Despite being recorded over a number of nights specifically for the record it feels like a seamless piece. Francis Rossi is in fine form from his traditional "How are you, alright?" welcome to encouraging the upstairs audience to "get the balcony moving" and later trying get the people down the front to calm down a bit and pace themselves. Early songs like "Juniors Wailing" and "In My Chair" are brought to life and the epic "Forty Five Hundred Times" and "Roadhouse Blues" are extended into monster boogie jams. The album has created memories so vivid at times I can convince myself I was actually there.

2. Hello! (1973) - "Hello!" has long been my favourite Quo studio album, though re-listening to the albums released between '71 and '76 made me realise how difficult it is to split them. I think "Hello!" wins the plaudits for me thanks to opening track "Roll Over Lay Down" and side B opener "Caroline", two of the best songs Quo have written. It also continues the album template set by "Piledriver" (8 songs, 2 classic side openers & an epic final song) with the nine minute "Forty Five Hundred Times". It was the first Quo album to reach Number 1 and the first to be entirely written by the band. 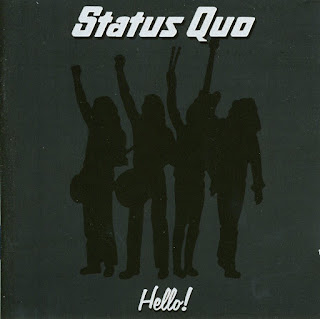 3. Piledriver (1972) - Probably the album that established the band in the Rock pantheon. It has three classic Quo compositions in "Don't Waste My Time", "Big Fat Mamma" and the brilliant "Paper Plane" and ends with a cover of The Doors' "Roadhouse Blues". The rest of the album keeps the standard high and it's really a close call between this and "Hello!". 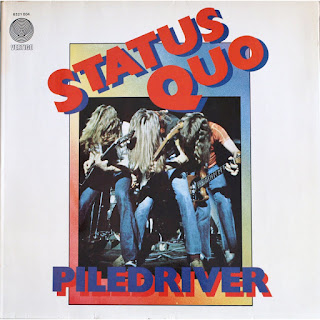 4. Dog Of Two Head (1971) - This is an album that has grown on me over the years to the point where it's close to being my favourite studio album. The band's fourth but the first to be released with the four piece Rossi/Parfitt/Lancaster/Coghlan line up after keyboard player decided he wasn't as committed to rock'n'roll success as the rest. Two seven minute plus songs, "Umleitung" and "Someone's Learning" hint at the band's change in emphasis as does the slightly shorter "Railroad" (one of my favourite Quo tunes). But these harder blues based efforts are broken up but by the jangly pop of "Mean Girl", "Gerdundula" and "Nanana". 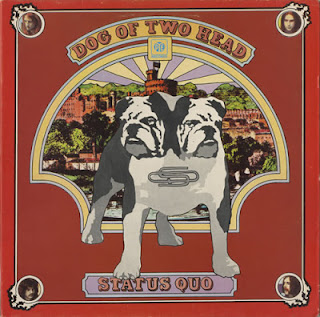 5. Quo (1974) - "Quo" edges out "On The Level" and "Blue For You" by sticking to the 8 song template. If anything this album is a little heavier than the previous two possibly a result of Alan Lancaster co-writing 6 of the tracks. "Slow Train" is another of those less well known Quo tracks that I've come to really like, "Backwater" kicks off the album in traditional up beat Quo style and the single "Break The Rules" provides a bit of light relief. 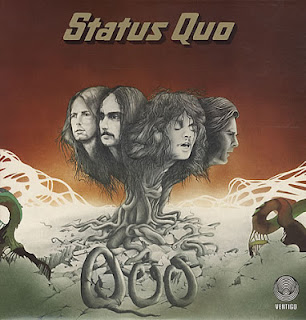 I became aware of Status Quo only yesterday! And I'm 42 so that's fairly shameful. Anyhow, my first listen was the entire Ma Kelly's album from start to finish and I thought it was a great album. Without delving too much more into them (yet), I'm curious as to why that album is not one of your favorites.

Perhaps as I experience more of their work it will become clear to me as to why it's not, but as of now it's a mystery.

I guess I got to know the later albums first and didn't discover Ma Kelly until I was already a big fan. I do like it though, Ma Kelly was probably the first typically Quo album the band made and you're right there are some brilliant tunes on it.

Do not forget On the level and Blue for you.
When Quo ruled the rock world...Epic band.