Top 5 Incidents with my Glasses at Gigs

OK. Something a little different this week. I hope this might act as a useful reminder to myself that a) I am stupid, b) Beer only serves to make me more stupid and c) I should NEVER wear my glasses down the front at a gig - it's only going to end one way. I guess anyone who knows me has a pretty good idea where this is heading. These are in chronological order.

5. Pendragon at The Marquee (Late 80's)
I was a big fan of prog rock at the time and a regular at The Marquee when it was based in Charing Cross Road. It was a popular venue for the new wave of prog bands that continued to eek out an existence in the shadow of the mini-revival boom that had been stoked by Marillion. For all their faults you could rely on a prog band for a good bit of pogo-ing down the front. It was in the midst of one of these nights that my specs came off. This was the first time it had happened and I remember shouting "No! My Glasses!" as they tumbled in slow motion through the air. Amazingly the people nearest to me heard and we were able to create a small pocket of space in the surrounding chaos. There on the floor, almost lit from above like some holy grail, were my specs. I scooped them up, stuck them in my pocket and we all carried on bouncing. Huzzah!

4. The Georgia Satellites at The Town & Country Club (Early 90's)
I was being careful. I'd learnt my lesson. I stayed further back and avoided the tempting crush down the front. Nodding my head to the music what could go wrong. Then the music got to me and my head nodding became more rigorous. One big flick and - ping! - glasses gone. I turned around to find where they'd fallen and saw the bloke behind me holding them in his hand. Gratefully retrieved my specs and shuffled off quietly to the bar.

3. The Phantoms at The Fighting Cocks, Kingston (12th May 2004)
Watching some mates play what may have been their first proper pub gig I was somehow goaded into making things a bit more lively. Following my last incident I'd purchased one of those spongy straps to keep my specs on at gigs and for a while they did the trick. They did make me look a bit spoddy though, so by the early 2000's I was wearing them less. This was just a pub gig anyway so I wasn't expecting to get involved. In the midst of a jumping frenzy I "sensibly" decided to tuck my glasses out of harms way by placing them just behind one of the front monitors. Perfect. All went well until the gig finished. I'm chatting with a mate and one of the guitarists comes over to say hello. As he stepped off stage there was a crack under his foot and my glasses were no more.

2. Detroit Cobras at ULU (8th September 2004)
Note the date. A mere four months after my previous incident. New specs in place. This was a cracking gig. I was well sozzled by the time the Cobras hit the stage and there was no way I could resist the lure of their blend of classic soul and garage rock. Mid-pogo my glasses did that familiar mid air somersault off my nose and disappeared into the dark below. Unlike the Pendragon gig I couldn't find them. They had completely vanished from view. Enjoying the rest of the gig I had a minor epiphany - realising that if I'm moshing about down the front I didn't actually need to be wearing my specs at all. When the bands had finished I had a root about to see if I could locate my specs and found just one single lens. It was heavily scratched and not much use but I took it home as a reminder that I needed to be more careful in future.

1. Dananananayroyd at Hoxton Bar & Grill (2nd April 2009)
This was a fun evening of beer and hijinks, missed last trains, an overnight stay in that there London and getting trapped in a corridor the following morning. Five years on and it looked like I'd got the message. I took a hard case to most gigs and stuck my specs away if I felt the urge to mosh. The specs I'd got after the Cobras gig were still going. They were a great pair of glasses, the coolest I'd ever owned, but were a little bent out of shape from the normal rigours of family life. That's no excuse though. I should have taken them off before the music took control. We'd had a fair bit to drink and not very much to eat. We'd come up straight from work and I'd forgotten to bring my case. The music started, the crowd went wild, I couldn't resist. Thirty seconds in and - spoing! Another pair of glasses hit the deck and disappear for ever. Another brilliant gig means I'm having too much fun to care. Again one of my mates went in search of my ruined glasses and amazingly found them amongst the dust and detritous at the front of the stage. They weren't in good shape.

This doesn't read too well for me does it. Over twenty five years attending gigs and I still haven't learnt my lesson. I'm over forty now, a father of two, I really should know better. Despite that, these were all great nights out. Maybe I just have to accept that this is inevitable. I also know that I should try contact lenses. I have had a couple of aborted attempts but it's the whole sticking your finger in your eye thing. Its just unnatural. 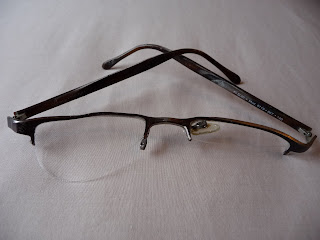 The shattered remains of my lovely OWP spectacles.
Posted by Chopper at Friday, April 10, 2009

I feel your pain. I had some fantastic D&G black framed specs. Everyone said I looked great in them. I saw The Hives at The Notting Hill Arts Club. A very small place. Way too small for crowdsurfing. Man lands on my head, glasses go flying. At the end of the gig there was absolutely nothing on the floor that remotely resembled a pair of glasses. They had been trodden on, jumped up and down upon, so thoroughly that they turned to dust...

I'm kind of glad I'm not the only one. Maybe we can start some sort of support group!

The picture doesn't really show it but there are no lenses left. We could feel the crunching of glass under feet as we pogoed and couldn't escape the feeling we were turning my specs back into sand!

Chop, you've not mentioned the great fun had by your mates in anticipation of the inevitable spectacles spectacle.

I know I'm predictable. What can I do? It's just the way I am.