The Herbie movies were simple but fun and were amongst the earliest films I can remember seeing in a cinema. I totally believed in the sentience of inanimate objects (I should perhaps point out here that I was only 6 when I saw the first film) and Herbie was proof positive that cars could do incredible things. Original director, Robert Stevenson, had made some of Disney's best kids movies (The Absent Minded Professor, Mary Poppins & One Of Our Dinosaurs Is Missing) but with Herbie found the perfect formula for boys under 10.

1. Herbie Rides Again (1974) - Directed by Robert Stevenson
This first sequel to The Love Bug is, in my view, the best of the series. Herbie's original mechanic Tennessee Steinmetz leaves Herbie with his great aunt Mrs. Steinmetz (played perfectly by the wonderful Helen Hayes) and the plot revolves around the attempts of, evil real-estate mogul, Alonzo Hawk's attempts to evict them from their Firehouse home. This is the first Herbie film I saw in the cinema and the mixture of the surreal and the madcap made it a winner. My highlight is the finale which sees lots of other V.W. Beetles come to life to help ward of the demolition crew and defeat the villains once and for all. 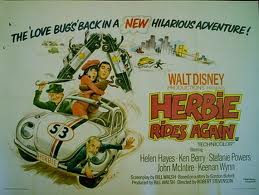 2. The Love Bug (1968) - Directed by Robert Stevenson
The original movie sees down-on-his-luck race car driver Jim Douglas (Dean Jones) acquire Herbie after defending the car from humilaitation by car salesman Peter Thorndyke (David Tomlinson). Thorndyke is also a race driver and becomes their bitter foe after Herbie beats him in a race having been tuned by Jim's mechanic friend Tennesse Steinmetz (Buddy Hackett). The Love Bug sets up the Boy-Car-Girl template that persists throughout the series, at heart these are quite simple love storys but in every one it's Herbie who remains the biggest star. 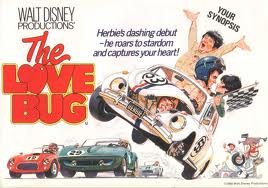 3. Herbie Goes to Monte Carlo (1977) - Directed by Vincent McEveety
Dean Jones returns as Jim Douglas and Herbie is back in the racing business though this time a cross continent chase from Paris to Monte Carlo. Don Knotts is entertaining as Herbie's new mechanic and the European backdrop provides some new scenary for the usual Herbie related mayhem. The much missed Roy Kinnear also makes an appearance as one of two thieves who hide a large diamond in Herbies fuel tank and then have to chase him around Europe in an attempt to reclaim it. There's a noticeable drop in quality with the loss of Stevenson as director but this film retains enough of the original movies charm to pull it off. 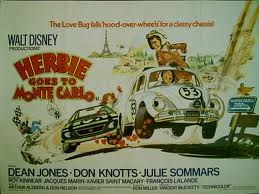 4. Herbie: Fully Loaded (2005) - Directed by Angela Robinson
A slight return some 25 years after the disaster that was Herbie Goes Bananas. This time Herbie finds a female owner in Maggie Peyton (played by a pre-rehab Lindsay Lohan), the youngest member of a racing family.The film recreates many of the scenarios we've seen before; Herbie helps owner beat race driver in posh big car, Driver accepts that Herbie is sentient, Driver bet's something important on winning a race, Herbie then delibately loses. Girl meets Boy, Boy falls for girl, car brings them together & they all live happily ever after. It's simple and a little cheesy but there are times when I think that's all we need. Fully Loaded restores a bit of pride to the series and gave me a little thrill in taking my eldest to see it when he was abount the same age I'd have been for Herbie Rides Again. 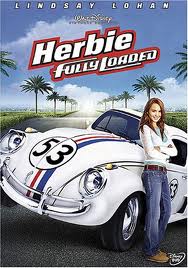 5. Herbie Goes Bananas (1980) - Directed by Vincent McEveety
Oh dear. This one is a shocker, poorly written and struggling to raise the gentlest of titters. Herbie is shipped to Brazil to take part in a Grand Prix but after causing havoc on the ship is dumped in the sea. He eventually surfaces, covered in rust and somehow finds his way to Mexico. The only scene that is even vaguely memorable sees Herbie as a matador in a Mexican bullring. Otherwise this was just a desperate attempt to prolong the series. 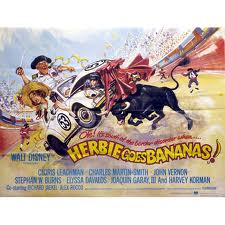 “Herbie was proof positive that cars could do incredible things.” – That is so true! At first glance, this Beetle looks less glamorous than other Volks autos. But mind you, this Beetle has a lot of movie titles on its belt. From the movie “The Love Bug” to the Lindsay Lohan starrer film “Herbie Fully Loaded,” this car shows performance, resilience and timeless curb appeal.