A second guest top five from Richard who is now a "proper published author" as well as continuing to write about Fulham at Craven Cottage Newsround. In fact not only is he a published author but also an Amazon Best Selling author! The book is a nostalgic look at a century of Fulham Football Club as is published, appropriately enough, by Haynes. If you're a Fulham fan you should definitely buy it - it's less than a tenner on Amazon.

Having got to know Richard through Fulham we have also discovered similar interests in fiction (his previous top five was an excellent summation of Raymond Chandler novels) and music. I've never really "got" the Grateful Dead. They have a massive back catalogue and like many bands with a long history it's easy to be put off by making a poor decision early on. I bought the fairly awful live album "Dylan & The Dead" and never went back. This top five seems like the perfect place to start again.

Pull up a chair. I’ve got about an hour of the greatest music you’ll ever hear.

You maybe couldn’t do this Top 5 about any other band. Best year? Who knows? But the Grateful Dead are different, in lots of ways.

The Dead, bankrolled and maintained by Owsley “Bear” Stanley, started to record their shows well in about 1968. Stanley, who had become famous as one of San Francisco’s leading LSD manufacturers, also had some mighty ideas about sound equipment, including the need to record performances. So their gigs – which were often very long and very strange – were committed to tape, and from ’68 to 1995 a good (and growing) proportion of their shows can still be heard. 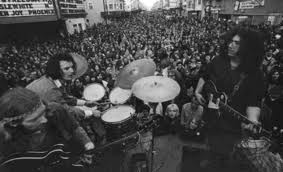 So what? Why would anyone be interested in this? Well I don’t know. On the one hand, imagine if you could hear your favourite song 50 different ways? Fast versions, slow versions, long versions, short versions, isolated versions, versions in the middle of jams. That’s all possible with the Dead.

But more than that, it’s wonderful to be able to hear the band evolve from a psychedelic blues-rock band in the sixties… well then we get country influences in the early seventies, juggernautism in the late seventies, some… ordinariness in the eighties, and a brief but wonderful resurgence in about 89. It’s all there, it can all be listened to , and most of it’s great. My ipod is full, and contains little else.

On we go then. My top five Grateful Dead years:

1. 1977 - Peak Dead. They’d been going long enough that they’d evolved tremendously, but not too long that they were jaded. Check that: they were jaded – they took most of 1976 off – but this only gave ’77 more freshness. The stretch in May is unparalellable, with the show at Barton Hall, Cornell University on the 8th particularly famous.

Why? I talked about the live music, right? Well until Jerry Garcia died much of this was kept in the Dead’s vault, and was only available through leaked soundboard recordings or audience tapes. (Fans were encouraged to tape the performances, thanks to a mixture of apathy on the band’s part and probably a sneaking suspicion that this all helped get the word out – a masterstroke, in retrospect).
Anyway, there were various circles of tape collecting, and if you knew the right people you might get the good stuff, if you didn’t you’d be stuck around the edges with a dodgy audience recording of a show nobody liked.

One show – a brilliant quality soundboard - worked its way to everyone though: Cornell University, Barton Hall, 8/5/1977. It might not be the best Dead show but it’s the best Dead show most people had on tape, and so became something of a gold standard.

Rightly so. The band had it all in May ’77, and in recent years two of the best live albums they’ve put out have come from that one, glorious month. This is fantastic music, absolutely mind blowing.

Sample: Morning Dew from the above show. Listen to this and tell me that the last few minutes aren’t the most extraordinary music there’s ever been.

Around 69 and 70 the Dead had the best of both worlds, their raw sixties glory and the LSD soaked improvisations combining to magisterial effect. It led to some music that really was, to coin a phrase, far out.
This is Dark Star. This is what they’re famous for. This is music for acid. This is everything...

3. 1968 - In ’68 the band were so raw, so deliciously raw. There’s a wonderful ragged edge to the music. Tapes from ’68 are – if the quality’s okay – always a joy. The band had a smaller repertoire, but absolutely nailed it every show. Or that’s how it seems to me anyway.

Here’s Viola Lee Blues from 1968. Tell me you wouldn’t want this playing in the background of the film of your life...

It’s amazing. I have a couple of 20 minute versions of this and they do it every time I hear them. Oooooooh.

This is 1989. The 80s were pretty crap for the Dead. Heroin, Jerry Garcia’s coma, plodding and uninspiring music. Then post-coma we get a resurgence. It took until 1989 to hit another peak, and by now the boys were on fire again. The clip I have below is from a show they played as “Formerly the Warlocks” in a bid to escape the crowds, and showcases the band’s awesomeness rather nicely. We get vocal tracks from Garcia, Bob Weir’s in there too, but the star is Brent Mydland, the band’s third (fourth? Who am I forgetting?)keyboardist. His vocals grab the hairs on the back of your neck on their own. Wowzers.

Garcia’s soloing in here is also something else. There’s an eighties feel to it, for sure, but it’s unmistakeably him and unmistakeably amazing. (Check the run from about four minutes for some great guitar work and some top growling from Mydland).

This was a third peak, in my mind, and the fall would be swift. Garcia never did control himself or his drug habit, Mydland died of an overdose in 1990, and after that they bumbled along to bring in the much needed cash, but playing big, soulless venues to fans who in some cases didn’t get the band at all. Dispiriting stuff.

5. 1974 - Bob Weir, the Dead’s second guitarist, once infuriated producer Dave Hassinger for asking for the music to sound like it was being played through ‘heavy air’. This was taken by some as evidence of Weir and the band’s insanity, or their being hard to work with, or something or other, but what Weir was after was that delicious sound you get in outdoor venues in the summertime.

The Dead cracked this with the Wall of Sound, which was exactly what it sounds like: a gigantic wall of amps that created a massive, massive sound, but a sound which was as clean as a whistle. 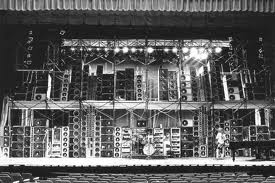 The problem was that the wall was so huge they needed three of them: one for the current venue, one traveling ahead to the next, one being taken down from the previous venue! The band also needed extra crew to handle all this, and the costs started to become a problem, leading to endless tours in increasingly large venues, and ultimately to burnout and a year off (1976). They took the wall apart and sold it off bit by bit.

But while it was going… wow. The 1977 sound was very polished, driven, exciting. ’74 is very different, holding onto the early 70s experimentalism, but somehow combining a laid back air with something very hard to explain.

That sound (from Wikipedia):

The Wall of Sound consisted of 89 300-watt solid-state and three 350-watt vacuum tube amplifiers generating a total of 26,400 watts of audio power. This system projected high quality playback at six hundred feet with an acceptable sound projected for a quarter mile, at which point wind interference degraded it.

It was way ahead of its time and led to some classic Dead shows.

An absolutely wonderful Brokedown Palace from Dijon, France, in 1974. Hear that sound about three and a half minutes… so clean, beautiful.
Posted by Chopper at Friday, September 16, 2011

Thanks for the comment, sorry for the slow reply I've been away.

Rich's top five reflects his personal favourites rather than any definitive answer.

Appreciate your list though, always great to hear people's opinions on these top fives - if you fancy doing an alternative Dead top five you'd be very welcome.

Nice response chopper. I must say that as Jerry was a huge believer in person freedom he would most likely approve of everyone having the right to an opinion of the five best years. I would include some of the early 1990's in there for sure.