Anyone Can Play Guitar - Month 1

I have a feeling that my selected title for this series of post is going to prove horribly ironic.

A quick recap for those of you who don't read every single post I make. As part of my New Year Resolutions I decided THIS was finally going to be the year in which I taught myself to play guitar. My aim is to be able to play 5 songs to a reasonable standard (i.e. recognisable by someone who knows the tune) by the end of the year.

I've always wanted to be able to play guitar but have never found the time or determination to sit down and give it a really good go. At the back of my mind I have a doubt that I ever really could. I don't think I have a natural talent for music. But then, opposed to that, there is a vast history of people from all sorts of backgrounds who can play guitar, which suggests if I just put the effort it I almost certainly could.

I'd already been pondering a new concerted effort this year and this crystallised into a resolution during a pre-gig chat with my mate Mark. Mark sings and plays keyboards in Feltham's finest covers band The Phantoms. He challenged me to be able to play a 5 song set live in 18 months time. Actually just typing that last sentence puts the willies up me a bit. Playing live may be a step too far but my more modest challenge seems achievable.

I bought my first guitar in the late 80s while I was at College. It was an cheap electric guitar by a company called Axe. It came with a series of tapes titled "How to play Heavy Metal Guitar" but even my Metal mate, who spent a bit of time helping me out, agreed it was not the easiest thing to play. At least it gave me something more satisfying to pull air guitar shapes with in my bedroom and, when my Mum & Dad were out, I had fun getting feedback out of the amp. It also provided me with my one brief moment of on stage stardom when I used it to "play" alongside Never Before Midnight (one of Mark's previous bands) at my 21st birthday. It was pretty obvious I wasn't plugged in but one Uncle complimented me on making the band sound more rocky. 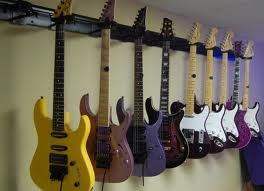 I eventually gave the Axe away to a friend and didn't have a guitar until my 40th birthday a few years back. This reinvigorated my desire to be able to play but, again, the lack of available time defeated me. My aborted attempts thus far have not gone much beyond strumming three chords and failing to move my fingers between them in anything less than 9 minutes. I have a long way to go.

True to form, my progress so far this year is minimal. I've not picked up my guitar all year. In my defence I have thoroughly sanded our staircase and applied two coats of paint (possibly three by the time you read this), I have helped my Dad out with his financial planning and I've done some long hours at work to get on top of all the work I failed to do before Christmas. These are all just excuses though. I promise to try harder next month.

I have downloaded an App for my phone to help me with the chord sequences and started a list of candidate songs. I'm hoping that if I pick the five songs which use similar chords I'll make life much easier for myself. Two hot favourites so far are "Folsom Prison Blues" by Johnny Cash (A7, B7, E) and "Bad Moon Rising" by Creedance Clearwater Revival (A, D, G). My plan for February is to have a go at both and then look for some compatible songs.

Suggestions are more than welcome by the way, leave your thoughts in the comment section below.
Posted by Chopper at Friday, January 27, 2012

Email ThisBlogThis!Share to TwitterShare to FacebookShare to Pinterest
Labels: Anyone Can Play Guitar

Great resolution! Best of luck and hard work. You'll do it.

Good luck mate! I've owned a an electric (Yamaha Acoustica) for 5 years and so far can only play a bit of the intro to Space Oddity, a couple of chords from Wish You Were Here, and a very poor version of the riff from Seven Nation Army.
I bought a bass guitar last year, I'm yet to even tune it.

I might be tempted to go head to head with you on this one. Perhaps we could even play live at Folsom Prison after we've been arrested for crimes against music! ;)

Nice one Eq. I think it's going to be hard but I'm hoping by writing about it I won't just continue to make excuses.

I can play the intro to Smoke On The Water & the main riff from The Chain on one string. There's a long way to go!