After a few weeks of trying to keep a lockdown diary of sorts I ran out of steam. That was partly me failing to find the time to write stuff that probably wasn’t of much interest to anyone but future me but also the feeling of unrelenting sameness that came with trying to survive a pandemic. Things haven’t entirely improved but the faint glow of light is glimmering in the distance.

Meanwhile, I’ve continued with my bullshit on Twitter (where it’s quick to write stuff and you feel less obliged to make it lengthy) so I’ve something of a backlog of Top 5s I could share on here plus a whole other project I’ll explain in a separate post.

If you’re still occasionally reading this blog then thanks for the patronage & apologies for the haphazard nature of updates. Let’s see how long I keep things going this time.

I’m a long time NFL fan, having first seen the Super Bowl via Grandstand who showed the highlights of Super Bowl XVI in 1982. Almost forty years later I’m still staying up into the small hours to watch the season finale (even though I really don’t like the now undisputed greatest QB of all time).

All that is a long lead up to my Top 5 favourite Quaterbacks.

1. Joe Montana - Joe Montana was the winning QB in that very first game I watched. He lead the San Francisco 49ers to a 20-0 lead half time over the Cincinnati Bengals. The Bengals got back into things in the second half but Joe Cool stayed true to his nickname and helped ensure the Niners held on to win 26-21. Montana remained a top performer for many years as I watched more NFL and whilst I didn’t end up a 49er fan I always admired his ability & poise.

2. Aaron Rodgers - I’ve recently converted to being a Green Bay Packers fan and A-Rod was part of the attraction. A remarkably talented QB who rarely turns the ball over. The fact he hasn’t won more Super Bowl rings (1 win, 1 loss so far) shows just how difficult it is to achieve. The Packers came mighty close to getting back to the big game this season and in doing so Rodgers claimed a 3rd NFL MVP of his career.

3. Russell Wilson - In my wilderness years (the period when I stopped following my first team and watched less of the sport as it went exclusively to Sky) Wilson was one of the bright sparks. A mobile quarterback who did as much with his feet as he did with his arm. Wilson is a little like Rodgers, hugely talented, genuinely nice guy and a little unlucky not to have won more.

4. Joe Theismann - Joe was THE man who won me over to NFL and made me a Washington fan. Channel 4 began showing highlights during the strike shortened 1983 season. Theismann & that Washington team seemed to overcome all the odds to make it to the Super Bowl that year and I was hooked. Joe had bags of personality too, maybe not as talented as Montana but really gutsy.

5. Peyton Manning - The first quarterback to win a Super Bowl with two different franchises. Hugely talented and with a howitzer of an arm. 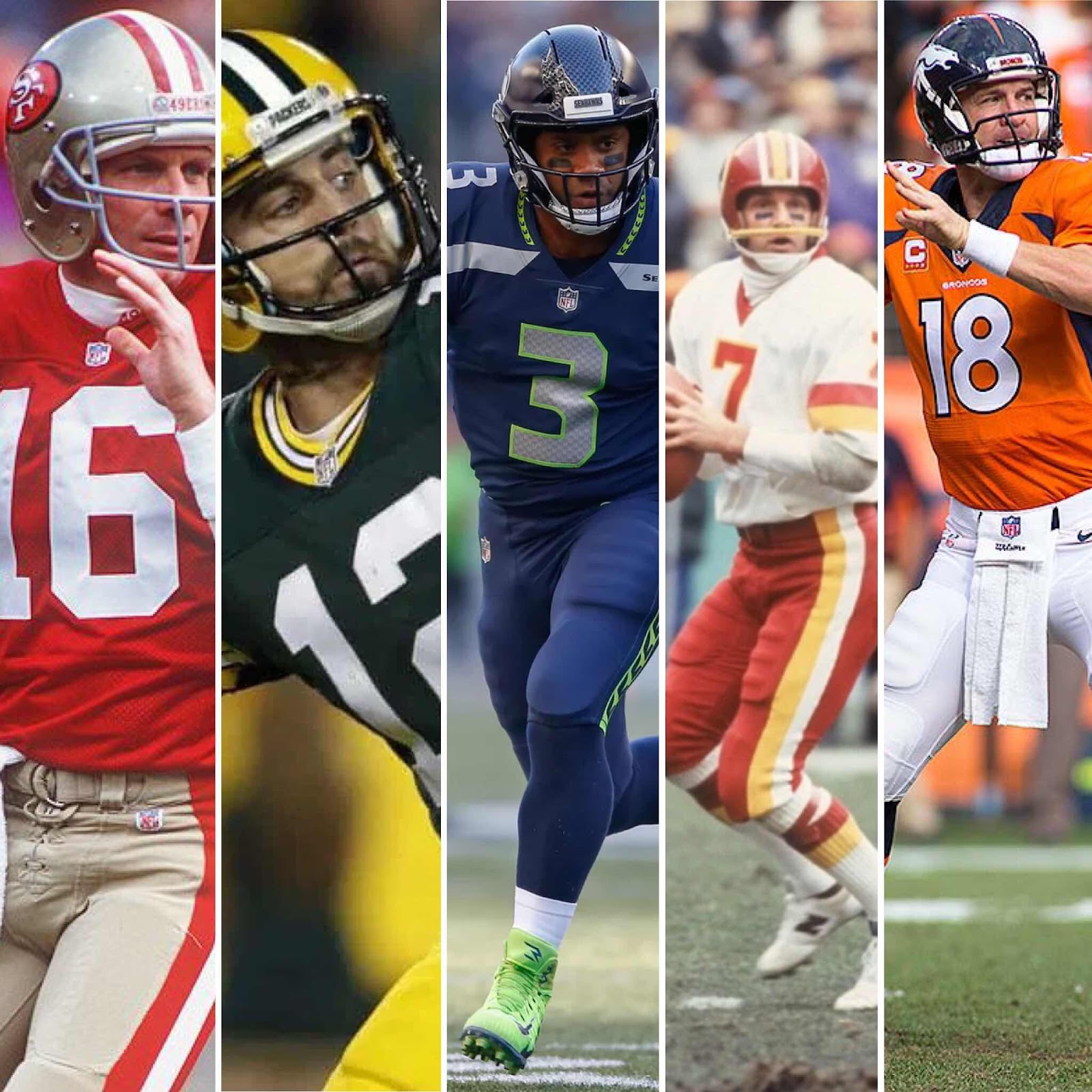 Feel free to add your fives in the comments.