I couldn't let the passing of Roy Skelton go without comment. The actor and singer was best known for voicing puppets George and Zippy on the popular children's television programme Rainbow. He also voiced the Daleks in Doctor Who from 1967 to 1988, as well as the Cybermen, the Krotons and various other Who aliens. He sounds like a genuinely lovely man who will be sadly missed by those who knew him. Whilst I cannot claim that Rainbow was one of my favourite programmes it certainly features prominently in my memories of growing up. The series ran from 1972 (when I was 4) until 1992 which makes me suspect I spent quite a bit of my early teens still watching. What could you do, we only had four channels back then.

Anyway I tried to do a top 5 episodes of Rainbow but a) my memory isn't anywhere near good enough to remember individual highlights and b) there were over 1000 episodes produced and I couldn't find a complete episode guide on the Internet. Instead here's a more generic top five of the best things about Rainbow.

1. Zippy - No doubt that Roy Skelton's input played a large part in the success of Rainbow. Zippy was the comedy genius at the heart of the show. Always quick with an inappropriate remark and the only member of the cast to ever suggest he might not want to follow the "good path". 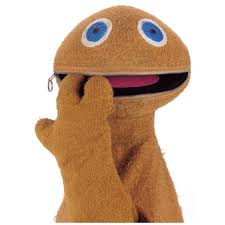 2. George - George provided the straight hippo to Zippy's quick fire humour. Their conversations were seamless especially considering both were voiced by the same man. At times one might appear to start talking before the other had finished. I think I'm right in calling George a hippo and not a cow, I remember the argument about what sort of animal George was being a topic of late drunken argument as a student. 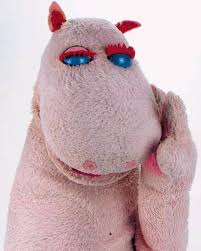 3. Geoffrey - I always felt a little sorry for Geoffrey. Even as a seven year old I had a sense of a man who was not following the career path he really wanted to. Though he always appeared to be smiling there was a sadness in his eyes. A hint of a man who had failed to achieve all his dreams and had ended up wearing horribly bright clothing on a kids TV programme with no hope of moving on. He was a nice man though, and clearly had the patience of a saint. 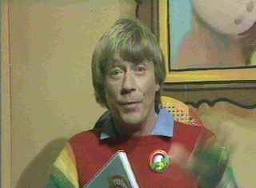 4. Theme Tune - This was a song that would stick in your head for days on end. In fact it still can. Even without playing it I can recite the lyrics at the drop of hat. It's not going to feature on anyone's favourite songs list but like all the best pop tunes it's difficult not to join in and sing along as soon as you hear the opening bars. 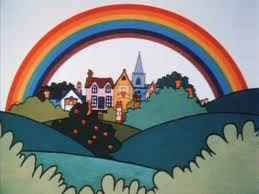 5. Rod, Jane & Freddy/Roger/Matthew - Musically they were pretty lame but they had an infectious enthusiasm about them you couldn't help but like. I don't really remember Matthew (Corbett who left to replace his Dad on the Sooty Show) but do have a vague recollection of the switch from Roger to Freddy. I didn't like Freddy very much at first, an early indication that I was never going to deal well with change, but he soon became the most entertaining member of the trio. I don't think I ever had any great interest in Jane. Whilst she was certainly pretty, she never caught my young eye. However if you look at pictures of the group over the years it's incredible how Jane has remained looking very much the same whilst the boys lose their hair and age less gracefully. 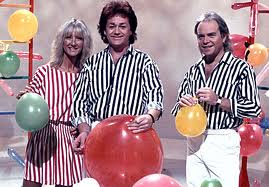 Oh, and I haven't forgotten about Bungle. Always thought there was something very suspect about him, and that bear costume! Seriously, someone must have been fired for designing that.
Posted by Chopper at Friday, June 17, 2011

When I saw the title I thought it was going to be about Ritchie Blackmore!

Sorry - I'll do that another week.