Time has rather gotten the better of me of late. My top five barrel is empty and I have not found the time to do justice to any of the subjects I have in the pipeline. Hooray then for the power of Twitter where I made a slightly desperate plea for assistance and recieved this brilliant top 5 from my former colleague and fellow maker of lists Richard.

Rich is a Cartographer, a Leeds United fan, a Yorkshire & England Cricket fan, a fully paid up member of the Centre-Back's Union and a lover of Indie-pop music. He tweets about most of these things @LUFCSupporter.

There are so many classic Simpsons episode that getting it down to five was a tough ask. Honourable mentions go to “The Dead Putting Society” (where Bart and Todd Flanders play off at mini-golf whilst their fathers bet on the outcome) and Lord of the Flies parody “Das Bus” (where the schoolchildren become stranded on an island after Otto crashes the bus). However, what remains are episodes I can watch again and again, and for the most part I can recite verbatim!

This is my personal favourite ever episode of the Simpsons as there’s an almost perfect plot and sub-plot. It’s not that often I find someone else that agrees with my first choice though.

Homer is challenged to a meat eating contest at the slaughter-house. His opponent, Red Barclay, beats him, but dies from beef poisoning in the process. On discovering he was a long distance lorry driver, Homer volunteers to drive his shipment across the country, with Bart as company. Homer and Bart stumble across the “Navitron Autodrive System” which drives the truck when Homer falls asleep at the wheel and a confrontation with the trucking fraternity ensues. Lisa and Marge meanwhile go in search of a new doorbell and are rescued from its subsequent malfunction by Senõr Ding-Dong. 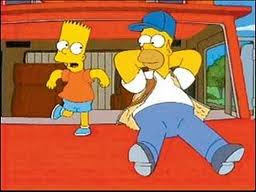 The mass of guest stars in this episode combined with Homer’s sense of injustice at everything make it an absolute gem. The song over the final credits is the icing on the cake.

The power plant enters a softball team in a company league. The team turns a corner from the previous season when Homer, complete with “Wonder-Bat” (made from the branch of a lightening-struck tree) begins smashing them to victory. Mr Burns, sensing a victory in the championship game, makes a bet with the owner of the Shelbyville power plant and brings in pro-Baseball players as ringers to ensure he doesn’t lose. The night before the big game all of his ringers (bar one) are struck down by a variety of misfortunes. However, the team go on to victory care-of Homer’s head when he replaces Daryl Strawberry as a pinch hitter in the final innings. 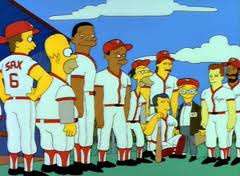 Best quote: ‘Mattingly, I thought I told you to trim those sideburns? Go home; you're off the team, for good!’

I’ve often seen this described as the best ever episode, and although it’s not my favourite it is certainly up there. Homer, the unwitting union man with a victory over the tyrant Burns

Following the mysterious disappearance of the previous Union leader, Mr Burns proposes a free keg of beer for the union in lieu of the plant’s dental plan in a effort to cut costs. Homer is (eventually) against the idea when he remembers that Lisa needs braces. He is elected union president after passionate defence of the dental plan. Over a series of meetings with Mr Burns, Homer’s frequent misunderstandings over what’s taking place lead Mr Burns to conclude he’s a tough negotiator. The power plant goes on striker and Mr Burns eventually cedes to their demands on condition that Homer resigns as president of the union. 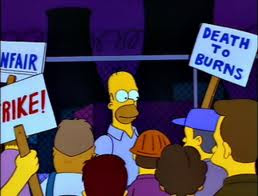 Best quote: ‘Smithers, I'm beginning to think that Homer Simpson is not the brilliant tactician I thought he was.’

Homer’s outrage at Lisa’s vegetarianism and her struggle to find acceptance bring hilarious consequences. The chant of “You don’t make friends with Salad!” contained in this episode has become commonplace amongst my family.

Following a visit to a petting zoo, Lisa decides she no longer wants to eat meat. Homer is naturally unimpressed and is in the process of arranging a barbeque with a roast suckling pig. Lisa steals the “Pig de-resistance” and pushes it down a hill where it falls into the river, gets stuck in the dam and is shot into the distance. Following an argument with Homer Lisa runs to the Kwik-e-Mart and gorges herself on what she thinks is a hot-dog. Apu advises her that it is a Tofu-dog and informs her that he is also a vegetarian and invites her to his roof garden to meet Paul and Linda McCartney. 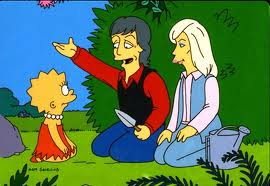 Another classic plot and sub-plot episode. The scene where Kent Brockman reveals he’s got exclusive access to the leader of the rebellion, and Homer’s (unanswered) prayers “don’t be the boy, don’t be the boy” still have me rolling about on the floor with laughter.

Bart fakes his end of year grades to ensure he can go away to Kamp Krusty over the summer. Homer easily sees through his cheating but allows Bart to go away with Lisa anyway. When Bart and Lisa arrive they discover that the Kamp is franchised by an absent Krusty and is more in keeping with a concentration camp, complete with death marches. Unaware of Bart and Lisa’s plight, Homer and Marge are enjoying a summer alone with Homer re-growing his hair and losing weight. Bart leads a rebellion against the camp which becomes televised news causing Homer to immediately lose his hair and gain his weight. Krusty takes the children to Tijuana for the rest of the summer by way of apology. 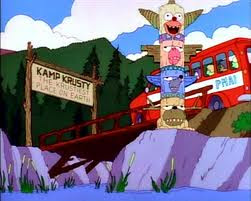 Best quote:
Marge: ‘Homer, you do remember your promise to the children?’
Homer: ‘Sure do! When you’re 18, you’re out the door!’