This was quite a struggle. As soon as I started to list out possible contender's I realised there are very few examples where all three films are genuinely good. There were so many trilogies with two great films and a hokey third that I had to ease up on my quality control. I was also surprised to find how few trilogies were made before 1960. I was hoping to pick a decent collection of Ealing comedies (St. Trinian's came close) or a classic spy thriller (Bond was always intended as a series I think and the Harry Palmer films didn't quite cut it). In the end I settled for the trios below. Maybe not perfect but all films I've enjoyed and would, for the most part, happily watch again.

1. Star Wars Original Trilogy - I'm undoubtedly biased in my opinion about how good the first three Star Wars movies are. I was 8 or 9 when the first film came out and it invaded my imagination. Empire was and is the best middle film ever made. A great movie in it's own right but it builds from first film's plot and sets up the final film in the same way those 1950s Flash Gordon TV shows used to. Return of the Jedi is the weak link in the pile. I've never quite accepted the Ewoks (they SHOULD have been Wookies!) but perhaps I being harsher than I need to be. 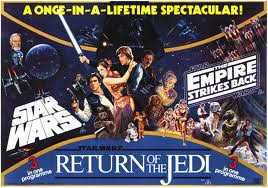 2. Three Colours Trilogy - This might be the closest you'll get to the perfect trilogy, though I appreciate they won't be everyone's cup of tea. I actually watched them specifically for this top five. That says more about my obsessive need to have a well balanced list than I really want to admit to but I'm glad that I did. All three have their own individual stories that only subtly intertwine, but there's a beauty about the cinematography and a consistency in the story telling that pulls them all together. 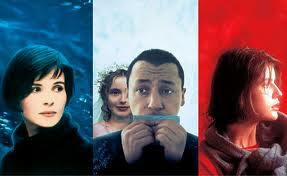 3. The Dollars Trilogy (aka The Man with No Name Trilogy) - Sergio Leone made his name with this trio of Clint Eastwood films, and changed the shape of Westerns in the process. They still have a quality I find enticing. Very little happens in the form of plot or characterisation but you find yourself drawn into the story.

4. The Godfather - Francis Ford Copella's "Godfather" trilogy is a prime example of the two classic films, one turkey anomaly I mentioned in the intro. I'd place both the first two films pretty high in my all time favourite movie list but the third fails to live up to the same standard. This was actually the first trilogy in my top five and then the first trilogy cut. But having recently re-watched the third part I decided that, whilst on it's own it is not a great watch, it isn't as bad as I first thought and successfully brings the story cycle to an appropriate close.

5. Mad Max Trilogy - Probably at fault for inflicting Mel Gibson on the world but, for me, the most consistent of the sci-fi trilogies I grew up with (Alien, Predator, Terminator). The first film is a glorious low budget cult classic and definitely my favourite of the series. The second movie benefits from a bigger budget but still retains the look and feel of the first. The third maybe gets a little carried away with the additional funding generated by the second but just about maintains the quality.

Ah, if only the Taxi series had stopped at 3, and not released a 4th. Also, no Back to the Future?

I've not seen the Taxi films (and had no idea they'd made more than one if I'm honest). Will check them out.

B2TF was considered but I've never been a huge fan.