Top 5 Snow globes (I have owned)

It probably won't entirely surprise you if I admit to the fact that I used to own a small snow globe collection. This wasn't entirely my fault. I'd worked alongside an American contractor for a year and we got on and kept in touch after he returned home. I'd also spent several weeks working in St. Louis and one of the mementos of that trip was a snow globe of the Gateway Arch. The Christmas after my friend repatriated I received a package from an unknown sender that included a snow globe from London. That began a period of several years in which I would randomly receive packages containing snow globes from various locations throughout the US; Washington, Memphis, Myrtle Beach and all points between.

Having recently reminded my self about this I went to look for them only to realise I had uncharacteristically thrown them all out. That means some of the pictures aren't identical but the nearest match I could find on the Internet. If you fancy starting your own collection this site seems to be the mother lode.

1. St. Louis - So this was the snow globe that started it all. The water in the one I bought myself went a muddy colour after a year or so but I felt this accurately reflected the state of the Mississippi that runs through the town. Later I received a second identical globe in one of my random packages. 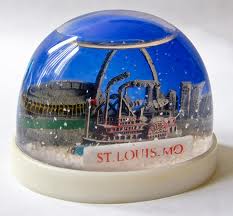 2. Guinness - A trip to Dublin for a stag do in the late nineties gave me the opportunity to pick up something very similar to the one in the picture below. Mine had proper white snow instead of shamrocks and created the most realistic snow storm I have ever seen in a plastic souvenir. 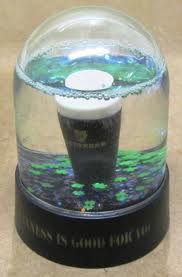 3. Loch Ness - Another colleague brought this in to me with the words "I thought you'd like this to add to your snow globe collection". I answered "I don't have a snow globe collection, I just get sent them occasionally from an old friend". She stared briefly at me, then looked at the growing numbers of snow globes that adorned my desk, raised her eyebrows and left the room. 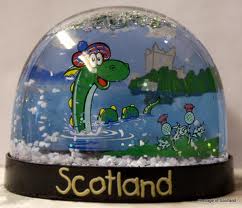 4. Paris - Probably the first globe I bought after admitting that I was a snow globe collector. Manages to achieve everything a cheap snow globe should. A minimum of three major city landmarks - check. A vivid use of colour - check. A small red on white nameplate - check. White plastic flakes that manage to completely fail to capture the way that snow looks - check. 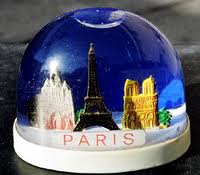 5. Niagara Falls - I think this may have been the last snow globe I received from my overseas pal. This one is particularly pleasing as I'd been to Niagara Falls during my stay in St. Louis. Despite the natural beauty of the falls themselves the town was the closest thing I've found to an English seaside resort outside of this country. The globe is a genuine work of art. I can't look at it long without chuckling. The falls could not be any less dynamic and the rainbow is gloriously lacking in colour. 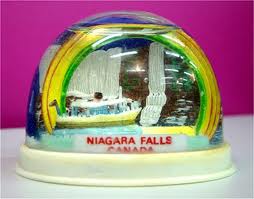 Hi,
I liked your blog and I personally invite you to join http://www.coollectors.com - The World's Free Collectors Zone.
We will also be happy to cooperate with your blog such as adding its link to our site.
All the best,
Diane
info@coollectors.com