As I continue to fail to get on top of my own top fives (several in work but not complete) I'm thankful to have some excellent guest contributions to fall back on. In fact, if I'm honest, they're generally better than my efforts anyway. Mike Whalley is a freelance sports journalist, based in Manchester. He is well-known enough to have received anonymous hate mail from Sweden, but not well-known enough to have his own Wikipedia entry. I got to know Mike (virtually!) via his World of Sport blog and specifically his genius efforts to track exactly who was Last on Match of the Day. Fulham appeared quite regularly in these posts, confirming what every Fulham fan already knew, whilst also confirming that fans of Wigan Athletic, Bolton Wanderers, West Bromwich Albion and Stoke City had a fair point too. Mike's recently called time on the blog to concentrate on other forms of writing but I was lucky enough to get him to write a quick top five before he goes "serious".

Seems like I say this for every Guest Top 5 but this one really is brilliant. Over to Mike ...

You remember Andy Crane? Children’s BBC? The broom cupboard? Edd the Duck? I once had him standing around 10 feet away from my desk presenting a local TV news bulletin while I was trying to get on with my work. Seemed an affable chap, but I’m not sure he knew what he was doing there either.

It happened when I worked as a staff journalist for the Manchester Evening News, and Crane was a presenter for Channel M, a TV station then owned by the same company. Every so often, Channel M would decide to give their nightly news programme a bustling World Of Sport-style atmosphere by hosting it from our office while we were approaching deadline. If Crane was Dickie Davies, the M.E.N. staff were the secretaries in the background. To be honest, the TV people got in the way, and I was happier when they weren’t about.

And yet, for all that, I wouldn’t even place being distracted by a former Children’s BBC presenter among my top five odd celebrity encounters.

1. Debbie Currie (2009). One lunchtime a couple of years ago, I was pottering around at home in south Manchester when the doorbell rang. I answered it to a jolly yet rather officious woman in her early 30s, with dark curly hair, who wanted to read my electricity meter. It was a rented flat, the meter was in the cellar and I didn’t have a key, so I gave her the landlord’s number, all the time thinking: 1) She seemed far more outgoing than any other electricity meter reader who had ever pitched up on the doorstep. 2) She seemed familiar.

Around 30 seconds after she had gone, it hit me. A quick Google search revealed a long Daily Mail article about Edwina Currie’s daughter, the one-time TV agony aunt, journalist and Stringfellow’s receptionist turned single mum. The article mentioned she was living in Glossop, about 20 miles from me, and included the sentence: “Debbie works as a gas and electricity meter reader.” 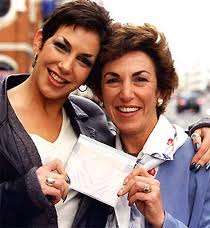 2. Russ Abbot (1981). I once sang on stage with the bloke who recorded ‘Atmosphere’. No, not Ian Curtis. My memory is a bit vague on this one, but Abbot’s website states that he appeared in panto at Stockport’s Davenport Theatre (where my mum worked) in 1981, which would mean I was four years old. That sounds about right.

Anyway, all I recall is that there was a break in the show at some point, and there was a call for children in the audience to volunteer to go up on stage with Abbot. My friend Rebecca and I put ourselves forward, and we ended up as part of a line on stage singing with Abbot, who was dressed as Cooperman. Who, if you’re too young to remember, was a cross between Superman and Tommy Cooper. Abbot went on to become the king of Saturday night TV for a few years afterwards. I didn’t. 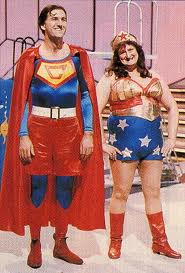 3. Sally Ann Matthews (1988). You can’t live in Manchester for very long without encountering past or present cast members of Coronation Street. Audrey Roberts was once behind me in the queue at Sainsbury’s on Quay Street, while I once walked past a decidedly under-the-weather Fred Elliott on Deansgate. My dad can do even better, having played in a charity rugby match against Ken Barlow.

But my first meeting with a Weatherfield resident came in an executive box at Boundary Park when I was 10. A family friend had managed to sneak me in there for an FA Cup tie between Oldham and Tottenham in January 1988. I’d already confused myself at half-time by taking a wrong turning on the way back from the toilets and ending up in the tunnel with the players as they were about to go out for the second half. The day got even weirder as a young ginger lass who looked suspiciously like the Street’s Jenny Bradley wandered into our box, sat down beside us and started cheering for Oldham.

Sally Ann Matthews was kind enough to sign my programme that day. Little did we know that, just over a year later, her TV dad would try to bump off Rita Fairclough. 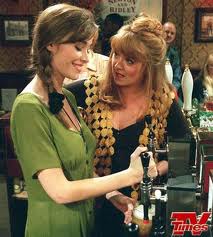 4. Bob Greaves (1987). Largely unknown outside the North West, Greaves was a local TV legend, presenting Granada Reports for more than 30 years. When Greaves died in March, aged 76, just about all of the obituaries referred to the infamous early 80s clip – repeated ad nauseum on various Denis Norden-helmed out-take shows – in which he was, ahem, ‘felt up’ by an elephant during a live broadcast from Chester Zoo. 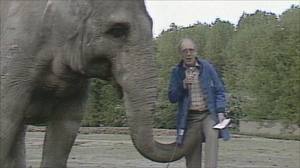 A few years later, Bob went back to Chester Zoo to film a follow-up feature with the same elephant. On the same day, I was there as part of a school trip. A few of us decided to approach Bob for an autograph. Terrified by the tide of schoolchildren heading towards him, he decided to make a hasty exit. He signed an autograph for a woman in front of us, then turned away from signing any more, saying: “Sorry. If I start now, I’ll never stop.”

Now I can’t look at Wilson without recalling the Father Ted episode. You know, the one in which Ted sees him during a trip to the mainland and decides it will be a good idea to shout his catchphrase at him.

The first time, in January this year, I found it relatively easy to resist. But the second time, about a week ago, he was wearing a dark suit with white trainers. I really couldn’t believe someone would go to the theatre dressed like that. I turned to my companion for the evening. “I don’t,” I began. Depending on your sense of mischief, you may be glad or disappointed to know that I stopped myself just in time. Zoe Ball once commented on my hat. That's about as exciting my life has ever been.

It's a unique, multicultural hotbed that could ultimately decide not only the GOP nominee but also the next president, making the state's Latino vote a coveted commodity. To
0 reviews all through the contemporary uggjpup2013 day modern society ugg boots sale uk
Sheepskin boots are great for all year round usage, as fleecy fibers inside the boot keep feet warm, while still encouraging air circulation.. The ultimate in luxury designer clothing has to still be the Ugg Classic Tall boots. This allows for maximum levels of cushion, comfort, and temperature control for feet.
Low best quality classic mini for sale might have similar branding and stitches http://www.buunion.org/activity/p/13539/ such as the authentic ones because they employed customary markings using the boots. It is reported that at present, the Patriot has provided big-capacity storage products for the State Council, National People's Congress, General Staff Department, General Armament Department, and General http://wallinside.com/inde.php?id=2782005 Logistics Department, People's Bank of China, Aerospace China and other units.