I started following SW6Badger on Twitter because he was a Fulham fan. I don't follow all Fulham fans on there but he had a nice icon with dancing badgers that appealed. I soon realised that not only was he a Fulham fan but he was also a fan of real ale. This is a good thing. I have recently also returned to drinking real ale as is befitting a man with a beard in his mid-forties. I suspect SW6Badger is a little younger than me but he clearly knows his beer. This is handy as my knowledge is a bit limited and handicapped by the fact that whenever I go out to "research" the subject I struggle to remember many of the details. Over to Mr Badger ...

This is the first time I have ever written a top 5 about beer, or any subject for that matter.

So let me introduce myself. I originally come from South West London now; I live in South East London. I used to be a lager drinker but about ten years ago I switched to “Real Ale”.

One day I walked in to a pub in Putney and thought why I am always drinking, Stella, Fosters etc.? Then it hit me! We live in a country that produces dome great beer. In fact I live in a city with a great brewing history. Why drink fizzy tasteless imported rubbish when we have so much choice in our on back yard?

I am not saying all beer from Europe, the U.S and others are rubbish. Some of my favourite beer comes from outside the U.K. So here are my personal top 5 ales from London.

1. Naked Ladies - 4.4% (Twickenham Fine Ales)
Twickenham Fine Ales started in 2004 and is one of the many new breweries that we now have in London. Yes the name is Naked Ladies. Do take the name with a pinch of salt. The name refers to the water nymphs statues that reside in the grounds of York House in Twickenham. This ale for me is everything that I want ale to be. It has a great aroma and golden colour. When you drink it, the hops really send your taste buds alight. It is refreshing with a satisfying finish. 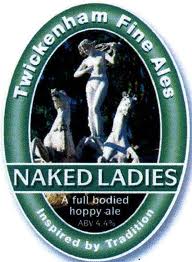 2. London Gold – 4.9% (Twickenham Fine Ales)
Twickenham makes the list again. This one I tried for the first time a few weeks ago at a beer festival. After one half I was hooked. I kept coming back for more. What I can say if the London Olympics did have an ale event, this might just clinch gold. This ale is big on hops and brewed with a few different types. Again it is golden ale that goes down very well. London Gold is occasional ale, so not always available.

3. Wandle Ale – 3.8% (Sambrook’s Brewery)
Sambrook’s started in 2008 in Battersea. These guys have gained a loyal following and I am one of them. This ale is names after the near by river Wandle. This is a great session beer. By that I mean a beer suitable for a few hours down the pub. The golden colour and balanced taste make this a popular brew. One to try on your lager drinking friends. 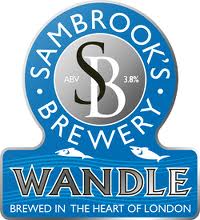 4. London Pride – 4.1% (Fuller’s)
It is an oldie but a firm London favourite. Fuller’s have been brewing in Chiswick since 1845. So they should know a thing or to about beer. A beer I have drunk more times than I can remember. Especially prior to a Fulham match. This ale has everything a well-balanced beer should have. A malty base with a hoppy finish. One thing I have noticed on my travels around London. To try this beer at its best I would always drink it in a Fuller’s pub. They always know how to keep in top condition 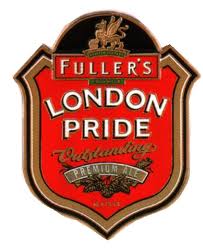 5. Spring-Heeled Jack – 4.0% (Ha’penny Brewing Co)
My last beer is a London Porter. Ha’penny started in 2009 in Ilford. This one is a bit hard to find. So if you spot it this winter, try it before it’s gone for another year. Being a porter it is a dark beer with a rich black colour. This beer has a great coffee/chocolate taste and great for cold nights in the pub by the fire.Don’t mistake porter for stout. They may look similar but are not the same! 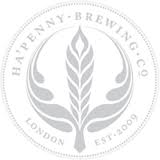 A Top 5 for London ales is almost impossible as the London brewers are always brewing new beers. This is just a small sample of what is out there. London is now an exciting place for beer and new brewers are starting up all over our great city. So give them a try.

Brew pubs in London – Brew Wharf, The Florence, and Zerodegrees.

Sorry Young’s, moving to Bedford has now ruled you out as a London brewer.

That’s it from me. Hope you enjoyed it.
Posted by Chopper at Friday, September 09, 2011